What is Central Sensitization?

Central sensitization is a condition of the nervous system that is associated with the development and maintenance of chronic pain. When central sensitization occurs, the nervous system goes through a process called wind-up and gets regulated in a persistent state of high reactivity. This persistent, or regulated, state of reactivity lowers the threshold for what causes pain and subsequently comes to maintain pain even after the initial injury might have healed. 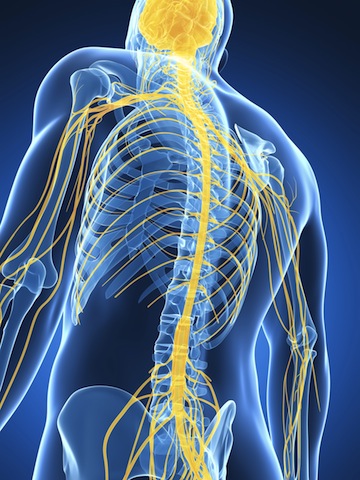 Central sensitization has two main characteristics. Both involve a heightened sensitivity to pain and the sensation of touch. They are called allodynia and hyperalgesia. Allodynia occurs when a person experiences pain with things that are normally not painful. For example, chronic pain patients often experience pain even with things as simple as touch or massage. In such cases, nerves in the area that was touched sends signals through the nervous system to the brain. Because the nervous system is in a persistent state of heightened reactivity, the brain doesn't produce a mild sensation of touch as it should, given that the stimulus that initiated it was a simple touch or massage. Rather, the brain produces a sensation of pain and discomfort. Hyperalgesia occurs when a stimulus that is typically painful is perceived as more painful than it should. An example might be when a simple bump, which ordinarily might be mildly painful, sends the chronic pain patient through the roof with pain. Again, when the nervous system is in a persistent state of high reactivity, it produces pain that is amplified.

In addition to allodynia and hyperalgesia, central sensitization has some other characteristics, though they may occur less commonly. Central sensitization can lead to heightened sensitivities across all senses, not just the sense of touch. Chronic pain patients can sometimes report sensitivities to light, sounds and odors.1 As such, normal levels of light can seem too bright or the perfume aisle in the department store can produce a headache. Central sensitization is also associated with cognitive deficits, such as poor concentration and poor short-term memory.2 Central sensitization also corresponds with increased levels of emotional distress, particularly anxiety.3 After all, the nervous system is responsible for not only sensations, like pain, but also emotions. When the nervous system is stuck in a persistent state of reactivity, patients are going to be literally nervous – in other words, anxious. Lastly, central sensitization is also associated with sick role behaviors, such as resting and malaise,4 and pain behavior.5, 6

Central sensitization has long been recognized as a possible consequence of stroke and spinal cord injury. However, it has become increasingly clear that it plays a role in many different chronic pain disorders. It can occur with chronic low back pain,7, 8 chronic neck pain,9 whiplash injuries,10 chronic tension headaches,11, 12 migraine headaches,13 rheumatoid arthritis,14 osteoarthritis of the knee,15 endometriosis,16 injuries sustained in a motor vehicle accident,17 and after surgeries.18 Fibromyalgia,19 irritable bowel syndrome,20 and chronic fatigue syndrome,21 all seem to have the common denominator of central sensitization as well.

Central sensitization involves specific changes to the nervous system. Changes in the dorsal horn of the spinal cord and in the brain occur, particularly at the cellular level, such as at receptor sites.3, 22

But what about the other, more common, types of chronic pain disorders, listed above, like headaches, chronic back pain, or limb pain? The injuries or conditions that lead to these types of chronic pain are not direct injuries to the brain or spinal cord. Rather, they involve injuries or conditions to the peripheral nervous system – that part of the nervous system that lies outside the spinal cord and brain. How do injuries and conditions associated with the peripheral nervous system lead to changes in the central nervous system, which, in turn, lead to chronic pain in the isolated area of the original injury? In short, how do isolated migraine headaches become chronic daily headaches? How does an acute low back lifting injury become chronic low back pain? How does an injury to a hand or foot become a complex regional pain syndrome?

There are likely multiple factors that lead to the development of central sensitization in these so-called ‘peripheral’ chronic pain disorders. These factors might be divided into two categories:

There are likely both biological, psychological, and environmental predisposing factors.

Low and high sensitivity to pain, or pain thresholds, are likely in part due to multiple genetic factors.1 While there is no research as of yet to support a causal link between pre-existing pain thresholds and subsequent development of central sensitization following an injury, it is largely assumed that one will be found.

Psychophysiological factors, such as the stress-response, are also apt to play a role in the development of central sensitization. Direct experimental evidence on animals23, 24 and humans,25, 26 as well as prospective studies on humans,27 have shown a relationship between stress and lowering of pain thresholds. Similarly, different types of pre-existing anxiety about pain is consistently related to higher pain sensitivities.28, 29 All these psychophysiological factors suggest that the pre-existing state of the nervous system is an important determinant of developing central sensitization following the onset of pain. It stands to reason. If the stress response has made the nervous system reactive prior to injury, then the nervous system might be more prone to become centrally sensitized once onset of pain occurs.

It's not that such pre-existing problems make people more prone to injury or the onset of illness -- as injury or illness is apt to occur on a somewhat random basis across the population. Rather, these pre-existing problems are apt to make people prone to the development of chronic pain once an injury or illness occurs.  The already dysregulated nervous system, at the time of injury, for instance, may interfere with the normal trajectory of healing and thereby prevent pain from subsiding once tissue damage heals.

Antecedent factors can also play a role in the development of central sensitization. The onset of pain is often associated with subsequent development of conditions such as depression, fear-avoidance, anxiety and other stressors. The stress of these responses can, in turn, further exacerbate the reactivity of the nervous system, leading to central sensitization.3, 34

Poor sleep is also a common consequence of living with chronic pain. It is associated with increased sensitivity to pain as well.35, 36

In what’s technically called operant learning, interpersonal and environmental reinforcements have long been known to lead to pain behaviors, but it is also clear that such reinforcements can lead to the development of central sensitization.37, 38, 39

Lastly, chronic pain rehabilitation programs are a traditional, interdisciplinary treatment that uses all of the above-noted treatment strategies in a coordinated fashion. They also take advantage of the research on the role of operant learning in central sensitization and have developed behavioral interventions to reduce the associated pain and suffering.50, 51  Such programs are typically considered the most effective treatment option for chronic pain syndromes.52, 53, 54, 55

For more information, please see these related topics: definition of pain, the neuromatrix of pain, the changing paradigms in chronic pain management, and the mission of the Institute for Chronic Pain to educate the public about empirical-based conceptualizations of pain and its treatments.

2. Yunus, M. B. (2007). The role of central sensitization in symptoms beyond muscle pain, and the evaluation of a patient with widespread pain. Best Practice Research in Clinical Rheumatology, 21, 481-497.